This common style of window normally has two sashes that slide up and down inside a frame.  The upper sash is on the ‘outside’ and runs in front of the lower sash.  The older ones are attached to sash cords and weights to make them easier to open and close.  If they are well maintained they will open and close with ease, but the majority I used to see as a Crime Prevention Officer were either painted shut or only the lower sash operated (some are actually made that way).

The modern, replacement sliding sashes in both timber and PVC-U have done away with the cords and weights and slide up and down aluminium runners set into the sides of the outer framing, although it is still possible to buy the traditional box sash with cords and weights.  You can also buy timber and PVC-U sliding sashes that are certificated to the British Standard PAS 24:2012 (Previously BS 7950 Windows of enhanced security)

What is a secure window?

See Windows that should be locked for a definition

If well maintained and properly locked, a traditional sliding box sash window will provide a reasonable level of security.  Apart from smashing glass, of course, timber sliding sashes that have not been fitted with key locks are opened in two main ways:

There are two types of centre catches that are vulnerable to attack:  A simple pivot catch can be knocked across using a knife inserted between the two sashes and a finger screw catch can often be knocked off using a thin chisel or screwdriver hammered up between the sashes, especially if they are loose fitting.  A third catch, which is less vulnerable to attack, is the half-moon catch, but don’t forget it’s not a lock, because most of them don’t have a key operation.

The second method involves levering the lower sash using a long lever such as a crowbar or a spade from the garden shed.  Most of the windows forced using a crowbar tend to be over-painted to the point that the sashes don’t close properly, leaving gaps in which to insert the lever.  However, I’ve seen well maintained sliding sashes fitted with dual screws (see below) overcome by using a spade with which you can apply enormous forces on the window.  This is why it is so important for you to properly secure the outbuildings in the garden. (See  Preventing crime in the garden, outbuildings and garage )

A dual screw comprises a full or half threaded bolt which is screwed through an internally threaded barrel fitted in the top of the lower sash into a simple hole in the bottom of the upper sash or in some cases into another threaded barrel.  The fully threaded bolt is more expensive, but it is a more secure fitting.  The cheaper, half threaded bolts can bend under force from a large lever, especially if the keep plate has not been fitted over the hole in the upper sash and both suffer from the problem of sash alignment if the window is poorly maintained or the timber swells and shrinks with the passing of the seasons.   If you want to improve the security of a modern timber sliding sash, the type that tilts inwards for cleaning, you will have to use the all threaded bolt to prevent the sashes from being forced upwards and inwards.  These locks should be fitted in pairs. 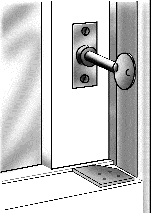 These locks are fitted in pairs to the stiles of the upper sash and prevent the two sashes from sliding past each other.  There are two main forms of sash stop where either the protruding bolts are removed with a key (and can be lost) or the bolt is extracted and retracted with a key (and therefore can’t be lost).  The locks can be fitted onto the upper sash about 100mm above the top of the lower sash to allow the windows to be opened a little way for some air without the worry of someone climbing in or two pairs can be fitted with the second pair fitted lower down to prevent any movement.  It is also possible to buy a three position sash stop that allows two open positions and one fully locked position.  To prevent damage by the bolts to the top of the lower sash the locks are supplied with metal plates.  However, some older sashes incorporate decorative tops (or horns) to the stiles and these plates cannot be used.  Remember to fully close and lock the windows when you go out.

Frame to frame locks sit on top of the lower sash and the bottom of the upper sash.  They are locked together with a push-in bolt or levered bar using a key.  As with the simple catches it is possible to access them from the outside, especially if the sashes are loose so they are best fitted in combination with dual screws or sash stops, especially if the sashes tilt inwards for cleaning.

Operating a dual screw or sash stop requires you to turn the key around and around in the keyway and therefore may not be suitable for those of you who suffer from a disability.  You should instead use a pivot lock in combination with a sash stop fitted to allow a 100mm opening gap.  Or you could use a pair of press button locks as described under Common casement window locks in place of the sash stops if the design of the window allows you to do so.  You can also use the services of a Master Locksmith who can fit purpose made locks that are more easily used by people with disabilities.