These locks are available with deadbolts, latches or a combination of both (when they're called sashlocks) and hook and claw bolts that are used for sliding doors. They are fitted inside a lock pocket or a mortice cut out of the door. They are very common and the chances are at least half of you will have them in one or more of your doors. They are available in two different sizes to suit the width of the door stile into which they are fitted and are operated either by a cylinder key or levered key.

To know which size you have measure the distance from the door edge to the centre of the keyhole. If the distance is 44mm then you will need a 67mm mortice lock. If the distance is 57mm you'll need an 80mm mortice lock. Mortice locks shouldn't be fitted to doors that are less then 44mm thick, although if your door is a couple of millimetres out the wrong way it can be fitted with a reinforcing kit, which bolts through the door and sandwiches the door and lock together. When you turn the key the bolts are thrown into a boxed keep, cut into the doorframe, although the really cheap ones may only have a simple flat plate with a hole in it for the bolt to pass through.

Most home insurers require at least one of the locks on your external doors to have either 5 levers or be certificated to BS 3621, so the first thing you need to do is to check that that they have these attributes.  Remember, we are not talking about multipoint locks here, we are talking about timber doors, some composite doors, some steel doors and some old aluminium doors that use a mortice deadlock or sashlock instead of a multipoint lock.  If the mortice lock is certificated to BS 3621 you will clearly see the British Standard kitemark on the face plate of the lock.  If this isn’t present then it could be a lock from Europe, which hasn’t been tested to the British Standards, but maybe to the European standard of EN 12209.  Try to identify the manufacturer, which if not on the faceplate of the lock may be on the key and speak with your insurers to see if the lock is acceptable.  If they need more information then you’ll probably have to take it out of the door and pop along to a locksmith for an expert opinion.  If you do this, please leave somebody at home! If the lock is not up to the job and is unacceptable to your insurer you’d better change it for one that is. If you’ve had to speak with your insurers about whether a particular lock (or door) is acceptable for your cover make sure they confirm this to you in writing.

In 2012 the price of the cheapest non British Standard levered mortice deadlock was about £15.  The price for a BS 3621 levered mortice deadlock lock started around £45, but you could spend as much as £90 on a cylinder mortice deadlock that is certificated to  BS 3621:2007+A1:2009 Thief resistant lock assembly. Key egress.   This is the latest version of BS 3621, but it is likely that insurers will still accept locks certificated to the previous version, BS 3621:2004 or earlier versions, but check with your insurer. Mortice sashlocks were about the same price. 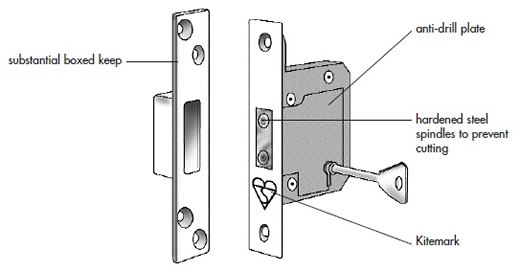 This type of lock is generally used in entrance doors to houses to back up the rim nightlatch.  They are best fitted about one third up from the bottom of the door to balance the spread of locking between the mortice lock and the rim nightlatch.  If the locks are not in this position, don’t get anxious; get advice from the police Crime Prevention Officer at the local police station (if they have one) or from a Master Locksmith.

If you are replacing the mortice deadlock and you share the main entrance door with another household fit one that is certificated to  BS 8621:2007+A1:2009 Thief resistant lock assembly. Keyless egress.   These mortice deadlocks unlock from the inside without the use of a key, so you won’t be able to lock each other in by accident.

If you live in a flat  and  you have an alternative means of escape other than the private flat entrance door you can fit this door with a mortice deadlock certificated to  BS 10621:2007+A1:2009 Thief resistant dual-mode lock assembly.   These mortice deadlocks have the same security attributes as ones certificated to BS 8621 but allow you to lock the internal thumbturn from the outside in the full knowledge that if you have accidentally locked somebody in they can get out safely using the alternative means of escape. 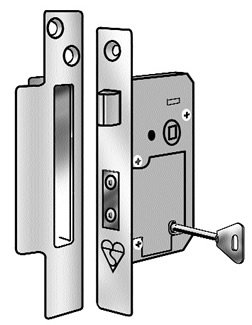 These are almost identical to the mortice deadlocks described above but incorporate a live bolt or latch in addition to the deadbolt.  They are normally positioned just below the centre of the door to miss the joint between the mid rail and latching stile.  These are used in private flat entrance doors (with an inside thumbturn operated deadlock if the flat is above ground floor) and in back and side doors of houses when they are normally supported with a pair of mortice security bolts.  Exactly the same security standards and features as mortice deadlocks above apply.