These come in a wide variety of styles and in two sizes with many different capabilities.  To know which size you have on your door, measure the distance between the edge of the door and the centre of the keyhole.  If this distance is 44mm then you'll have a narrow stile nightlatch.  If the distance is 60mm then you'll have a standard stile nightlatch.  The following paragraphs only deal with the ‘cylinder’ nightlatches, not the ‘old fashioned’ oblong shaped levered rim locks and latches that you may find fitted onto very thin doors in old houses (often internal doors).

Rim nightlatches are sometimes referred to as ‘Yale’ locks, but of course Yale makes lots of different locks and lots of different lock manufacturers make rim locks!   Most people with a timber entrance door or an older aluminium door will have one located about a third of the way down the door on the inner surface and you’ll use it to open and shut the door.

The main ‘live’ bolt (or latch) in one of these has a rounded leading edge and is spring loaded.  The latch is withdrawn into the casing as you turn the inside knob to allow you to open the door, but you can close the door by simply pushing the door into its frame – a sort of ‘slam to lock’.  These locks always need a key to unlock them from the outside.  The latch can be deadlocked in an open or closed position by sliding the snib on the inner face.  These sorts of locks are really at the bottom of the pile for security and were being supplemented with mortice deadlocks by the late 1960s.  If your door has a multipoint lock then there will be a latching bolt in the middle of the door that is operated by the handle.  On back doors fitted with sashlocks, the sort with the handle and the key hole underneath, you’ll find that this too has a latch operated by the handle.  Simples! 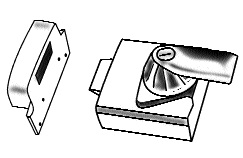 These locks are the same as the nightlatches above except you can deadlock the latch from the outside with a turn of the key.  This means that the latch cannot be slipped with a piece of plastic (James Bond style).  Some of them also allow you to lock the turn knob on the inside with the same key (instead of the snib) and this will prevent slipping from outside and the knob being turned by sticks, cables and so on through the letter plate.

These differ from the first two in having a deadlocking pin just above or below the latch.  When you close the door the pin is depressed into the mechanism and it deadlocks the latch, which will prevent slipping.  Most of them also allow you to key lock the inside turn knob as well.

If you are replacing the nightlatch make sure you buy one that is certificated to  BS 3621:2007+A1:2009 Thief resistant lock assembly. Key egress.   Locks like this will be marked by the British Standard Kitemark.  This is the latest version of BS 3621, but it is likely that insurers will still accept locks certificated to the previous version, BS 3621:2004 or earlier versions, but check with your insurer.  These higher quality rim nightlatches will sometimes have a flat ended latching bolt which is thrown into the keep as the door closes. These locks are not suitable for communal doors because of means of escape issues.

If you are replacing the nightlatch and you share the main entrance door with another household fit one that is certificated to  BS 8621:2007+A1:2009 Thief resistant lock assembly. Keyless egress.   These nightlatches have the same security attributes as ones certificated to BS 3621 but operate from the inside without the use of a key.  Instead, you’ll have to improve the security of the door so go to  Improving the security of your existing doors .

If you live in a flat  and  you have an alternative means of escape other than the private flat entrance door you can fit your private flat entrance door with a rim nightlatch certificated to  BS 10621:2007+A1:2009 Thief resistant dual-mode lock assembly.   These nightlatches have the same security attributes as ones certificated to BS 8621 but allow you to lock the internal thumbturn from the outside in the full knowledge that if you have accidentally locked somebody in they can get out safely using the alternative means of escape.  However, we do not recommend using this type of nightlatch if you live in a flat, because the door will have a closer on it and you could accidently lock yourself out

Roller bolt nightlatches have a spring loaded rolling catch, which is designed to simply hold the door in its frame without locking.  The catch is released by either pulling or pushing the door; no key is required.  These nightlatches are sometimes seen fitted to private flat entrance doors which have door closers. This means that if you walk out of your flat and the door closes behind you won’t lock yourself out.  The roller bolt doubles up as a deadbolt by turning the inside handle or by turning the key in the lock when you go out.  Most are unlocked from the inside without the use of a key, which is important for your means of escape.  These locks may not be suitable for fire resistant doors as they may not operate efficiently enough to allow the door to fully engage into its frame against the closer and door seals.  Speak to a Master Locksmith about this.

Somewhere in my office I have a crime prevention leaflet from the late 1950s warning people to fit locks on their doors and use them at night when watching TV.  This is because while they were transfixed by this relatively new technology the thief would let themselves into the rest of the house and steal the handbag or the transistor radio!  What I found surprising was that the leaflet was telling people to fit locks to their doors, clearly indicating that people didn’t lock them and probably only threw some bolts at night. I am minded by early episodes of Coronation Street where you’d see a character in the back room and then hear another one out of shot calling out “Cooey, it’s only me!” as they let themselves in through the latched front door.  How times have changed!