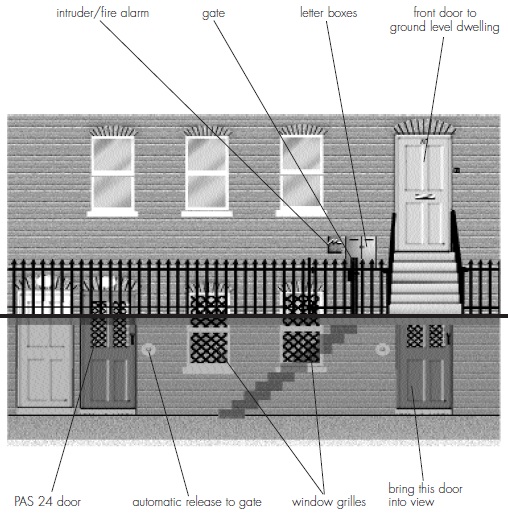 Basement flats, which have their own private entrance below street level, accessed via a set of steps from the street above, are at a disadvantage because the entrance door cannot be clearly seen from the street.  In Central London it is not uncommon to find external grilles over the windows to keep the burglars out and many of these would have been installed by the Victorians when the house was occupied by a single family (and the servants).  Occupiers of these flats today are probably more than happy with the security arrangements they have inherited and who would blame them?  However, such security does mean that you have to consider you fire escape plan very carefully indeed.  The  London Fire Brigade website  will provide you with lots of useful information.

Personally, I dislike external security grilles, not just because of the obvious fire safety risks that they present, but also because they can be hostile in appearance and add to the general doom and gloom of an area that suffers crime.  They sort of say “Hey, look at me, our neighbourhood has lots of crime”.  If you absolutely need grilles it would be far better to have removable ones installed internally or concertina (collapsible) gates so that they can be undone and the windows used as an alternative means of escape.

In some circumstances the basement flat entrance door will need to be fire resistant, especially if neighbours, also living in basement flats, have to escape past your door and your flat is on fire.  If you live in a basement flat and the windows are extremely secure (perhaps with internal grilles or the ‘fire trap’ external grilles) then it would be an advantage to have (or you may already have) door locks that do not need a key to unlock them from the inside.  (See  Fire doors in a domestic setting in this chapter and  Access opportunity and alleyway gating, Common access problems that encourage crime,  Access to basement flats )

To ensure your fire safety arrangements it would be wise to speak with Building Control before you upgrade the security in a basement flat.

If the entrance door is not a fire resistant door and Building Control have advised you that it need not be then you should secure it in a similar fashion to Entrance doors to single occupancy houses  with the additional security measures, but substitute the door locks for ones that are certificated to BS 8621.  BS 8621 locks have thumbturns on the inside of the locks instead of keyholes so that you don’t accidentally lock yourself and your family in.