The professional term used for a light fitting or fixture is a ‘luminaire’.  A luminaire is a complete lighting unit that controls the distribution of the light emitted by a lamp and includes all the components for fixing and protecting the lamp and for connecting the lamp to an electrical circuit.  Luminaires used for street lighting are often referred to as lanterns.  Luminaires are obviously designed to house all types of lamps and the more common ones seen around the house are described below: 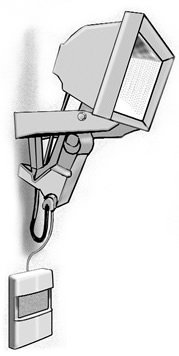 Local authorities receive more complaints about domestically used high wattage tungsten halogen floodlights (more than 150W) than any other light fitting.  They also receive a lot of complaints about lower wattage ones, which have been poorly installed.  The reasons why people complain and the many disadvantages associated with very bright floodlights are listed below:

For further information download a PDF copy of the Institution of Lighting Professionals' guide entitled 'Guidance for the Reduction of Obtrusive Light'.

These lamps are sold by some DIY stores and on-line to worried people who have been burgled and think that a bright light that comes on automatically will stop it from happening again.  They are available in various wattages from 200W to as much as 500W.  (I swear the latter can be heard coming on; a sort of ‘Ker-chunk’ noise!)  The cheaper ones have an integral passive infrared detector (PIR) that switches them on and the luminaires often have poor optics so that the light goes everywhere.  The boxes are often labelled ‘Security lights’ but they should carry a warning label to advise the purchaser that the light could seriously annoy your neighbours!

To be fair to the retailers a lot of these floodlights are really intended for commercial applications such as the down lighting of a warehouse yard during vehicle movements and loading where a lot of good quality light is required for safety reasons.  The responsible retailers market them as such, but the problems arise when the householder thinks that brighter is better and use them in their garden

The better types are lower wattage, certainly 150W and below and will have an independently located passive infrared detector, so you can reduce the number of false activations, They will have hoods and or special optics that enable you to control the beam of light and some will also incorporate a timer so that you can set them to operate only for a minimum amount of time and a photoelectric cell that will completely shut them off during daylight hours.  Recent changes to the Building Regulations mean that an electrician sticking to the regulation’s guidelines will only install a maximum 100w flood if it uses a tungsten halogen lamp.  (See  Lighting, Building regulations affecting lighting )

The Crime Prevention Website recommends luminaires that are designed to throw forward a controlled light footprint onto the ground using compact fluorescent lamps.  In effect these luminaires are fixed to a rear wall of the house with the face set parallel to the ground.  This means that all of the light goes downwards and outwards (and certainly not upwards!).  Providing due care is taken during the installation it should be possible to prevent most light spill onto neighbouring property and because the luminaire is parallel to the ground any glare is hugely minimised.

Another advantage with this type of luminaire is that during a social event in the garden your guests aren’t continually blinded by floodlight glare.  These types of floodlights are available with adjustable PIR detectors or wire free ones and timers and a quick search on the web will identify a good choice. There can be a slight delay before the lamps reach their optimal operating temperature and emit their maximum amount of light.  Not all of them will operate via a PIR, so make sure you read the specifications.

Comparison of different types of floodlights

*It is fair to say that the above table is not really comparing like with like as the 26W low energy floodlight cannot compete with the higher wattages of the halogen.  That said, light has only a limited affect on crime levels anyway and so it is better to fit a number of low energy lamps around the garden than one extremely bright and polluting halogen floodlight.

A bulkhead luminaire is simply a glass or plastic box that contains a lamp.  It may incorporate a PIR detector and timer to switch it on and off and some may also have a solar switch so that they only start working after dark and then stop working at sunrise.  For the majority of us a few well placed bulkhead luminaires that use low energy compact fluorescent lamps (600 to 900 Lumens) are all we really need around the house and garden.

If vandalism is an issue where you live then it is better to select one that has a polycarbonate cover rather than a glass one.  Some bulkhead luminaires have been designed to be vandal resistant, although I am not aware of any that have been tested to any published security standard.

As with floodlights, some designs of bulkhead fittings will allow some of the light to go upwards where it simply isn’t required and so you should look for those that are designed to direct the light to where it is needed, which is on the ground and up to face level.

If you want to install decorative, more ‘traditional’ outside lights around the house and garden then do try to select those that will accept low energy compact fluorescent lamps.  Try also to confine your choice to those that direct the light below the horizontal.   This would ordinarily dismiss the ‘globe’ lamp, but the better quality types have optics that direct most of the light below the horizontal, and filter a very small amount of light to illuminate the top of the globe to achieve the full ‘lit ball’ effect.

Illuminated bollards have their place in lighting arrangements and are sometimes useful for illuminating pathways or way-marking.  However, you are advised to select the shaded type whereby the light is directed downwards onto the path and not upwards into the eyes, which will have a debilitating affect on the eyes (the pupils will get smaller) making it more difficult to see the way ahead.  Bollards luminaires are not suitable for car park lighting as most of the light is blocked by the vehicles.

For large properties that may require lighting along approach drives, paths and car parks you will probably need to install a combination of column, bollard, and bulkhead luminaires  and  should seek expert advice from a professional lighting engineer (See Directory 'Lighting Design and Consultancy').  Whilst the best light distribution will be delivered from a well directed column mounted luminaire, the expert advice will ensure that you use the right type of lamp and the minimum number of columns and other light fittings required to do the job.

I must again emphasise that light that goes above 70° is bad, wasted light.  If you want to floodlight the elevations of a large dwelling you should again use the services of a professional lighting engineer who can select luminaires with optics and shading designed to target the light to the precise proportions of the elevation.  The professional will also take account of the reflective properties of the building and the forecourt in their calculations to provide the most cost effective solution.