There's no instant or off the shelf solution for blocks of flats that have access problems.  So I thought that it might be useful to provide a couple of examples of projects I worked on in Camden so you can see the sorts of things that me and the local authority got up to.

For my first example about access problems around blocks of flats I have chosen a local authority development of three low rise blocks located in north central London.  I was the Crime Prevention Design Adviser on this borough at the time and I can pretty much remember the problems and solutions.  Many of the techniques used to counteract the problems ended up in the tool bag to be used on other developments later. 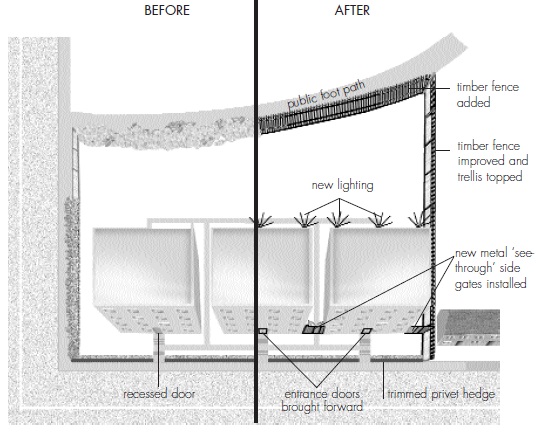 Three parallel four storey residential blocks each containing 12 flats occupying a roughly square site, with a public road to the south (Southern Road) and another public road to the west (Western Road), a shared boundary with some further residential blocks on the east side and a public footpath to the north side.  Each block was separated from each other by a 4 metre gap which included a pathway.  At either end of these three blocks were further gaps with pathways.  All four pathways provided open access from the communal front garden into the large rear communal garden.

The rear garden was about twice the area of the footprint of the residential blocks.  The fronts of the blocks were set about 5 metres back from Southern Road and there was a 1.8m hedge marking the boundary between the footpath and the front garden.  The block entrances each had their own uncontrolled access path off Southern Road via gaps in the hedge.  The shared boundaries with the other residential blocks, the public footpath and the road on the west side consisted of poorly maintained and holed hedges and fences, with the incomplete hedge bordering the public footpath standing about three metres tall.

The main entrance doors to each block of flats were deeply recessed.  The windows and private flat entrance doors had recently been replaced with new enhanced security types.  Each block also had a back door leading into the rear garden.  These were not recessed.

Ever since the doors and windows had been replaced there had been no forced burglary.  However, three ground floor flats had been burgled during the summer via open windows to the rear.  Some potted plants had been stolen from the rear garden on two occasions.  Graffiti tags had been sprayed along the side walls of all the blocks.  Trespass by non residents into the back gardens had resulted in damaged trees and shrubs, a great deal of littering and several calls for police assistance.  Just before I got called in by the council the residents began finding drug detritus and human excreta in the rear gardens and even within the recessed entrances to the blocks.

I met with representatives of the residents committee and the council housing manager on site.  I had already analysed the calls to police over the preceding 12 months and had spoken with the local home beat police officer (This would now be a member of local neighbourhood policing team).  After two more meetings with the residents and with their agreement I prepared a written report for the council and the residents and made the following recommendations (Please note that the actual report would have contained photographs and would have been much more detailed):

Although the improvements took 6 months to complete, the benefits were quickly realised.  Calls to the police to deal with crimes in the grounds reduced from around 3 a month to none.  There were no burglaries or thefts reported for at least 12 months after the improvements and trespass and drug taking in the grounds stopped.  The residents generally felt much happier and several worked together to maintain and improve the garden.  This all happened about ten years ago and so I hope that the improvements have been maintained.